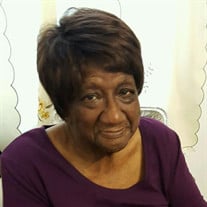 MARYLAND – Flossie, 89, a resident Baltimore, passed away Thursday, December 31, 2015 at 7:15 am at New York Presbyterian Weill Cornell Medical Center, Manhattan, NY. She was preceded in death by her parents, Samuel S. and Maggie B. Warren her husband, Scipio F. Brown, Sr, and her son, Scipio F. Brown, Jr.; 7 sisters, Viola Gary, Gracie Coleman, Eloise Williams, Channie Chaulk, Evelyn Moore, Millie Monroe, and Ellen Fonaris; two brothers, Bennie Warren and Leroy Warren; three brother-in-laws, Brunson Brown, Felix Brown. She was a member of Concorde Baptist Church, Baltimore, MD, and before leaving Ivor, she started her spiritual journey at Ebenezer Baptist Church the early 60’s. She always put others before herself. Flossie was considered the caretaker of the family. She lovingly took care of her mother’s brother, Uncle Stephen Pierce until death and later during her life, she took care of her mother until death. Flossie loved cosmetology and would dress all of her sisters and nieces’ hair. If she could help you, she would extend a helping hand. Later, Flossie moved north for employment and landed her first job at Pickersongill Retirement Community, Townsend, MD and later she was hired at Holly Hill Manor, Townsend, MD, where she would go the extra mile to assist the elderly in feeding, bathing, dressing, and taking them outside for fresh air. Flossie was the family matriarch and everyone went to her for advice. Her family was the center point of her life. The apple of her eye was her grandson and her great grandson. She is survived by her grandson, Scipio F. Brown, III and great grandson, Scipio F. Brown, IV; 3 granddaughters, Nytisia D. Brown, Ka’Pre I. Bright, and Haley T. Brown; 2 sisters, Arlinda (Frank) Leigh of Ivor, VA and Maggie G. Clary (Johnnie) of Suffolk, VA; two sister-in-laws, Constance Hill and Catherine of Baltimore, MD; 2 brothers, Samuel Warren (Georgie) of Smithfield, VA and Lewis Warren (Josephine) of Jamaica, NY; a beloved niece, Sharon McLeod of Baltimore, MD and a host of nieces, nephews, cousins, and other relatives and friends. Please keep the Brown family in your thoughts and prayers!

MARYLAND &#8211; Flossie, 89, a resident Baltimore, passed away Thursday, December 31, 2015 at 7:15 am at New York Presbyterian Weill Cornell Medical Center, Manhattan, NY. She was preceded in death by her parents, Samuel S. and Maggie B. Warren... View Obituary & Service Information

The family of Mrs. Flossie Mae Brown created this Life Tributes page to make it easy to share your memories.

Send flowers to the Brown family.