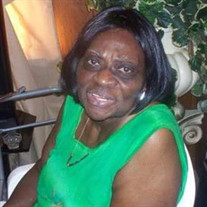 Mary Holley Parker was born July 16, 1924 to the late Mary and Plummer Holley in Colerain, NC. On Saturday, May 14, 2016 at 6:04 P.M., Mrs. Mary, 92, peacefully transitioned from this life at her home in Hampton, VA. She was preceded in death by her parents, her husband, Otis Parker, a brother; Plummer Holley, and two sisters; Willie Mae White and Pauline White. Mary joined Zion Hill Baptist Church in Colerain, NC at an early age, was a faithful member, and sung in the choir. Mary was the oldest of thirteen siblings and she assumed the responsibility of head cook for the family. Her brothers and sisters looked up to her and her father valued her opinion. Mary’s mother made sure she kept a level head and entrusted the farm to her. Each day, Mary walked eight plus miles to Colerain Elementary School where she mastered budgeting, financing, and investments. Mary had a little money put aside when no one else had any and was able to purchase a refrigerator for her father in 1949 with her own money that she earned from the proceeds of an acre of cotton. Mary married Mr. Otis Parker late August, 1950 bringing into one daughter and his son. Her workload doubled when she married because she now had double households. She continued to assist her parents on the farm without complaints. Memorial Day was celebrated at Mary’s home in Harrellsville, NC for over ten years. Mary cooked everything from the time of arrival until Monday or Tuesday’s departure for the entire Holley family and friends. Mary loved to cook everything from Scratch and tried to cook everybody’s favorite dishes. In 1990, Mary moved to Hampton, VA to be with her granddaughter, Venezia A. Jimenez. Mary was the oldest family member and continued her legacy for many years. To recognize her for diligently continuing her family legacy, the family presented her with an award on May 27, 2006. On her 89th birthday, July 16, 2013, special congratulations from the Mayor of the City of Hampton, was sent via mail wishing her good health, much happiness, and best wishes. Her memory will be cherished by her daughter, Dora Parker Jimenez of Hampton, VA; one son, Johnson Freeman (Linda) of Norfolk Virginia; two sisters, Marie Lowe ; Baltimore, MD, and Ada Smith (Vernon Lee); Brooklyn, NY, five brothers, Leadell Holley (Mary), Rudolph Holley (Annie Mae), Lettie T. Holley (Vera), Clarence Holley (Patricia), and William Earl Holley; all of Baltimore, MD; two granddaughters, Venezia A. Jimenez, Hampton, VA, and Lisa Gaskins, Ahoskie, NC; two grandsons, John Freeman, Jr., and Devin J. Freeman, Norfolk VA; and a host of nieces, nephews, cousins, other relatives and friends. Please keep the Parker and Jimenez family in your prayers!

Mary Holley Parker was born July 16, 1924 to the late Mary and Plummer Holley in Colerain, NC. On Saturday, May 14, 2016 at 6:04 P.M., Mrs. Mary, 92, peacefully transitioned from this life at her home in Hampton, VA. She was preceded in death... View Obituary & Service Information

The family of Mrs. Mary Holley Parker created this Life Tributes page to make it easy to share your memories.

Send flowers to the Parker family.