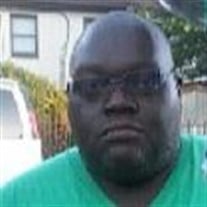 Obituary for Robert “Rob” Knox On December 16, 2018, our loved one Robert Knox transitioned from labor to reward at his home. Robert, affectionately known as “Rob” lived a full life. He was the son of the late Bessie Valentine Knox and Curtis Knox. He was a native of Suffolk, VA., where he was born and raised alongside his siblings Clarence and Cynthia Knox. Robert received his education through Suffolk Public Schools System, and graduated from John F. Kennedy High School. After graduation, Robert went on to earn a living by working for numerous companies such as Waste Management and City of Suffolk Parks and Recreation; where he was employed until his health began to fail. Robert also gave his life to the Lord at an early age and attended Antioch UCC., in Suffolk, VA., where he served as a Trustee, and sang with the Male Chorus under the leadership of Pastor Jarvis Jones. Robert was loved by all who knew him, and touched the hearts of many. He is preceded in death by his Mother and Father, his sister Cynthia Knox and one brother: Clarence Knox. He leaves to cherish his memories, his wife: Doris Knox, two stepchildren: Min. Tammy Hunt and Lennell Holloman. Eight grandchildren: Armone Holloman, Travis Holloman (Tiffany), Laquintia Hunt, Tequan Helms, Manasseh Holloman, JaCieon Baker, Abigail Holloman and Aniyah Holloman. One devoted Aunt: Barbara Gholson, and one Godbrother: David Goodman. Six nieces: Lakeisha Knox, Precious Elliott, Nikiya Walker, Talasia Knox, Kaprajuia Elliott and Nicole Harrell. One nephew: Kamon Elliott. Five sisters-in-law: Virginia Warren, Rose Roberts, Brenda Johnson, JoAnn Holloman and Emma Hackett. A devoted sister-in-law: Vanita Knox, and two brothers-in-law: Jessie Holloman, Jr., and Vernon Holloman (Geraldine). Two lifelong devoted friends: Eric Skeeter and Eugene Goodman, and a host of cousins, friends and extended family.

The family of Mr. Robert Knox created this Life Tributes page to make it easy to share your memories.

Send flowers to the Knox family.