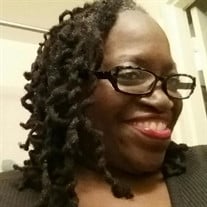 Shari Rodgers Harris was born in Portsmouth, Virginia on October 1, 1957 as the only child of Carroll M. Rodgers, Jr. and Isabelle Mott Rodgers. She was raised in the Cavalier Manor section of Portsmouth, where she excelled in school from an early age and graduated from Manor High School in the class of 1975 with honors. Shari attended Morgan State University from 1975-1979, majoring in Psychology and contributing to the renowned Morgan State University Choir for all four years. Shari met her husband, Benjamin Harris III, at Morgan, and they remained married from 1981 until 1998. As an officer’s wife, she travelled to many places and spent several years living in Italy and Germany, speaking French and Italiano. Returning to the States, Shari lived in Maryland, working the next ten years in the housing industry for NVHomes, and MDC Holdings/Richmond American Homes. Her duties included community manager, selling new homes and processing mortgage applications. Shari moved back to Virginia in 1998 and worked for Home Finance Company for two years before suffering a stroke in 2000. Shortly thereafter, she moved into “Syke’s Senior Village” in the Berkeley section of Norfolk. Exceeding all medical expectations and astonishing her doctors, but not her family and friends, Shari quickly became the "go to person." She made herself available to drive other residents to the grocery store, to the doctor, and to work at no charge. After losing both of her legs in 2011, Shari was no longer able to drive. However, she continued to help others as she volunteered to work in the office, answering the phone, contributing to the newsletter, and serving on the Senior Citizen Council. Shari suffered another stroke on September 5, 2016 of which she was unable to recover and joined the ancestors on September 16, 2016. Shari had a giving heart, always smiling and willing to help. She was loved by many and will surely be missed. She was an active Life Member of the International Black Women’s Congress for more than 20 years, participating in annual national conferences and the legacy gala. She was also a life member of the Community Presbyterian Church in Portsmouth, where she continued to lend her beautiful voice to the choir. Shari was preceded in death by her father Carroll M. Rodgers, Jr. and mother Isabelle Mott Rodgers. She is survived by her paternal aunts Dr. La Francis Rodgers and Cynthia Rodgers; her maternal uncle Herbert Mott (Dorothy), maternal aunts Josephine Alexander, Ernell Mott, Lottie Mott, Mary Lee Murphy (Andrew) and Dorothy Robinson. Shari is also survived by many cousins, who called her “sister cousin,” and a host of dear friends who loved and cared for her as she did for them. A memorial service for Shari will be held on her birthday, October 1, 2016, at 3:00 pm at the Community Presbyterian Church located at 801 Tazewell Street Portsmouth, VA 23701 Hampton Roads Funeral Chapels is assisting the family.

Shari Rodgers Harris was born in Portsmouth, Virginia on October 1, 1957 as the only child of Carroll M. Rodgers, Jr. and Isabelle Mott Rodgers. She was raised in the Cavalier Manor section of Portsmouth, where she excelled in school from an... View Obituary & Service Information

The family of Ms. Shari Rodgers Harris created this Life Tributes page to make it easy to share your memories.

Shari Rodgers Harris was born in Portsmouth, Virginia on October...

Send flowers to the Harris family.